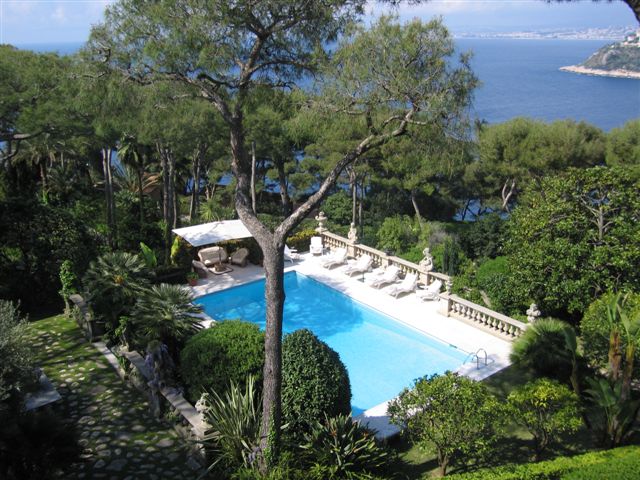 One hundred and fifty villas, apartments at the entrance to the Cap or in the village, and internationally known… The idea that rarity makes for an exclusive market is certainly borne out on the most highly-prized peninsula in France. Property in Saint Jean Cap Ferrat is spectacular.

Independent since 1904, the commune of Saint Jean Cap Ferrat has been the subject of many articles: its illustrious residents, its dizzy prices per sq metre ‘the most expensive in France’ according to some.

It’s not easy, however, to be absolutely sure, for here discretion is the golden rule. Information one takes for granted may belong to the past, with the present diluted into a tale somewhat between reality and myth. A respect for privacy, as high as the hedges surrounding these sublime properties, is an essential requirement for those who live on Cap Ferrat.

One agency that has been based on the Cap since 1946 also points out to a general rise in prices of over 50% during the past five years, with top notch properties and the best locations posing an even steeper rise. Over the last decade, Cap Ferrat has outstripped the Cap d’Antibes in terms of prices. The agent however advises the buyers to exercise caution; in the past months, there has been a slower demand for lower and mid-range properties and more demand for real estimates, which indicates the arrival of new products on the market in the near term and thus a less significant rise I prices that have been seen hitherto.

Clients are mostly foreigners looking for holiday homes. Cap Ferrat plays host to English, Irish, Americans and Russians, and still a few Italians: to a lesser extent Belgians’, Germans and Swiss. One agent puts the recent rise in Irish buyers down to a tax change in their home country. “Fewer than they were two years ago, clients nevertheless have higher budgets”.
“A sea view is priority and security, an area in which the authorities have made considerable efforts, is an undeniable advantage. In the village, still as authentic as ever, life is very enjoyable. And while grounds are smaller than those on the Cap d’Antibes, the scenic views of the Mediterranean, the view of the cliffs along the coast and luxuriant vegetation all complete in natural beauty. Cap Ferrat’s geographical location, between the international Nice Cote d’Azur airport and the Principality of Monaco, also guarantees the presence of an elegant and wealthy international clientele”.

From very early on, the glossy clientele has played its part in Cap Ferrat’s fame – Nicolas II, Empresses Eugenie, Elisabeth of Austria and Marie of Romania, James Gordon Bennet and especially Leopold II of Belgium and Béatrice de Rothschild have all lived here.

A singer from the Paris Opera, dancer and theatre actress, Mariya Kuznetsova purchased La Desiree in 1912, a recently renovated property which overlooks the point of Cap Ferrat. Born in Odessa but based in Paris, the artist appeared in many plays throughout the world: Saint Petersburg, New York, Chicago, Milan, Buenos Aires, Paris, Nice, Monte Carlo where she would interpret the most prestigious repertoires such as La Boheme by Puccini, Manon by Messenet or Roméo and Juliette by Gounod.

Due to a demands from a new discotheque industry, she releases a dozen hits, she afterwards along with her first husband José Lasalle and their three dogs in the residence named Désirée. During this time, the diva accepts to give several private concerts, notably in the Villa Vigier, owned by the Count of Milléant, or at the Negresgo Hotel.

In the 1920s, Maria Kouznetzoff remarries with one of the sons of the composer Jules Massenet and becomes highly successful in the cinema business. She builds her own theatre team which was composed of several Russians in exile and worked in Europe, South America and Japan.
After the First World War, the villa changes hands and becomes “Alta Rocca” before being repurchased in the 1930s by a Brazilian who rebaptises the villa “Les Bugas”. The owner increases the size of the property and adds the second floor, removing the frescos, bell tower and balconies. The original La Désirée Saint Jean Cap Ferrat is today difficult to recognise.