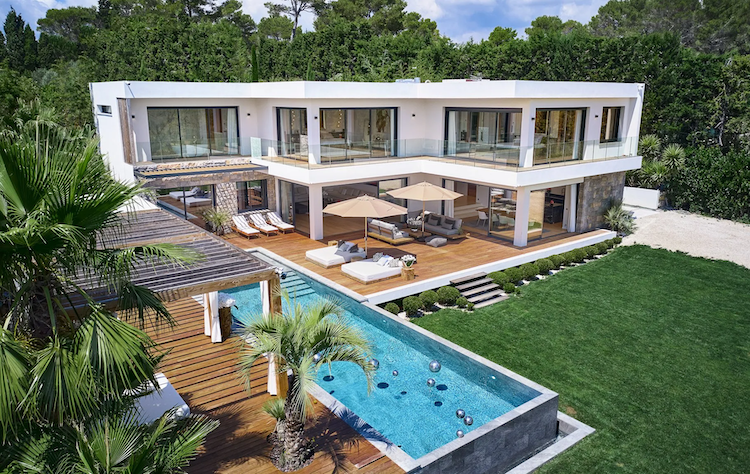 Without doubt, Mougins is one of the most beautiful villages of the Cote d’Azur. In the following article, we discuss the history of the village, famous artists who settled here.

In addition, a few examples of Mougins luxury real estate.

Only 15 minutes drive from Cannes, this medieval village is set amongst pine, olive and cyprus forests. A pretty hill top town is also located just eight kilometres by road from Grasse, the perfume capital of France.

Known as a centre of gastronomy and the French “art de vivre”. Mougins dominates other towns and villages towards the base of the Alps.

Surrounded by forests (the Valmasque covers 427 hectares), Mougins has steadfastly maintained the quality of its environment. It also offers visitors panoramic views of the Cannes, the Lerins islands, Grasse and the Alpes.

As soon as you arrive in the village, you will inevitably be seduced by the charm of the narrow roads, bordered by colourful flowers and  medieval houses with picturesque doorways. Similarly, carefully restored stonework and beautiful window frames.

At the end of the 19th century, the ideal climate and location of Mougins began to attract many people, both French and foreigners. In 1924, Francis Picabia, a surrealist, avant-garde painter, developed a passion for Mougins and decided to settle there. The artist shared his enthusiasm with his friends, thereby attracting some of the greatest figures of our time to this small village.

The harmony of the colours and quality of light have seduced many artists and celebrities to live or stay in Mougins, including Pablo Picasso. He spent the last 15 years of his life here. Similarly, Cocteau, Man Ray, Winston Churchill, Christian Dior, Catherine Deneuve, Edith Piaf and Jacques Brel. Mougins has long had close links with the art and cultural world.

The most famous of all was Pablo Picasso, who came to the village for the first time in 1936. Among those who accompanied him were Jean Cocteau, Paul Eluard and Man Ray. Then Picasso decided to move there permanently. As his refuge from the world, he chose an ideal site overlooking the Bay of Cannes, near the chapel of Notre Dame de Vie. There he continued to work and spent the latter part of his life with his wife Jacqueline.

Fernand Leger, Robert Desnos, René Clair, and Isadora Duncan all came to Mougins, as well as Christian Dior. Mr Dior lived in the heart of the village while he was producing some of his most famous fashion collections.

Today there are countless artists residing in Mougins, where country charm is complemented by a view of the sea.

On the village outskirts, luxurious properties are hidden behind magnificent Mediterranean parks and gardens.

What to see and do in and around Mougins

As well as its enchanting ambience, Mougins has two golf-courses, over 40 restaurants and 18 art galleries and studios.

Visit the old town and fountains, the St Jacques le Majeur church. Chapelle St Barthelemy the EcoParc Mougins and the Photography Museum as well as 18 other art studios, galleries or exhibitions.

The Notre Dame de Vie medieval chapel, where Picasso lived, was built in the 12th Century and then reconstructed in 1646. The picturesque surroundings captivated Picasso and were also painted by Winston Churchill.

The priory, next door to the chapel, was once Picasso’s private residence and studio. The Chapel Notre-Dame de Vie is free to visit and open every day in July and August. Weekends in May, June and September and Sundays from October to April.

The MACM, the Mougins Museum of Classical Art is an extraordinary art museum located in Mougins. The MACM opened to the public in June 2011.

The museum has won several international awards and has loaned dozens of objects to other mseums and university exhibitions all over the world.

The museum’s large and diverse collection of antiquities. For example, Roman, Greek and Egyptian sculpture, vases, coins, and jewellery, and the world’s largest private collection of ancient arms and armour.

The founder of the museum, Christian Levett, is a British investment manager with an interest in history and art.

Home to Europe’s largest lotus colony, the Fontmerle Pond is a must-see in Mougins. The Fontmerle is a remarkable five-hectare site with a natural pond on the edge of Parc de La Valmasque.

The lotuses bloom from July to mid-September with flowers up to 25cm in diameter and leaves up to 1m across.

Not to worry if you miss the lotus blooming though, as this natural pond is also home to over 70 species of birds. Some species live in the park year-round, while others only visit in winter.

The Parc de La Valmasque is open all year round and is free to enter. Plenty of parking nearby as well as a dedicated car park.

The International Perfume Museum in Grasse

Slightly outside of Mougins, the MIP gardens will truly awaken your senses. Used as the plant conservatory for the International Perfume Museum, these gardens are home to species of plants traditionally grown for perfumes. In addition, contributing to the conservation of varietal diversity in plants used for perfumery.

If you’re a keen golfer, you’re in luck! Mougins is renowned for its idyllic golfing environment. The Cannes Mougins Golf Club is an exclusive golf club featuring a par 71, 18 hole course. Running over 6000 metres and considered to be a jewel of the Riviera.

If you are not a member you can still access the golf course with the Côte d’Azur Golfs Pass.

An ultra contemporary Villa Available for Rent. Close to the Village of Mougins.

For the full listing please, visit the following link : https://www.alexandra-lloyd.com/form_rentals.php?reference=MG11

A Wonderful Family Home available for rent during the summer

Famous Architects on the French Riviera