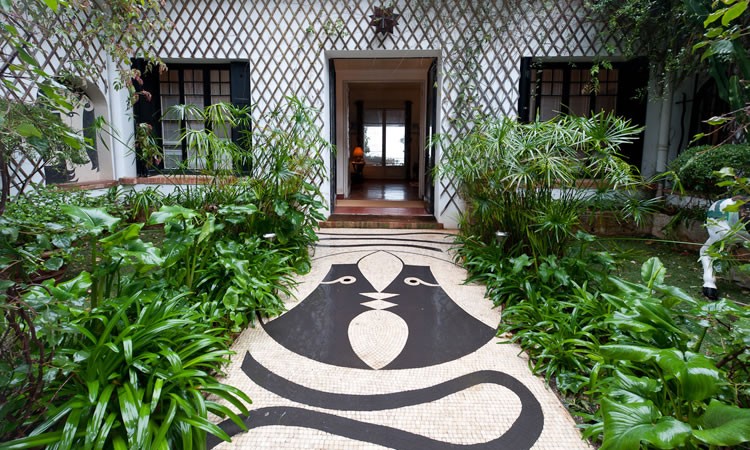 Villa Santo Sospir Saint Jean Cap Ferrat is one of the most well known villas on the Cap Ferrat peninsula, due to the famous drawings by Jean Cocteau during the 1950’s. Jean Cocteau was a regular guest and a friend to the villas then owner, Francine Weisweiller along with many other well known figures : Coco Chanel, Greta Garbo, Picasso just to name a few.

The villa was purchased after the Second World War by Alec Weisweiller, as a promised gift to his wife from surviving the war. Mr Weisweiller promised to buy Francine the villa of her dreams and during one of her stays at the Negresco hotel in Nice, she pointed across the Mediterranean towards Saint Jean and said ‘I want to live there’. That she did, enjoying the elegant location, breathtaking views and numerous guests that paid her visit.

The villa was decorated by Francine Weisweiller’s friend, Madeleine Castaing who correctly claimed that leopard print would come back into style, and used this as a carpet leading to the downstairs bedrooms, which still remains today. Another particularity is the use of bamboo in the dining room – on the walls, ceiling and furniture.

Jean Cocteau visited the house for the first time in 1950 and begin his work to ‘tattoo’ the villa. All of the walls of the villa are covered by his splendid paintings, many of which pay tribute to Greek mythology, notably Apollo in the sitting room above the fireplace.

In one of the downstairs bedrooms in the Villa, Jean Cocteau drew three rings on the ceiling, which were believed to inspire the Trinity ring by Cartier. According to Icon Icon : Jean Cocteau, designer, filmmaker, writer, and painter, Louis Cartier imagined an unexpected silhouette for the creation of the ring with a little help from his friend. In 1924, Jean Cocteau imagined “Saturnian” forms. Using the French artist’s imagination as a starting point, Louis Cartier conceived a ring made of three different precious materials: Cartier’s three-piece ring.

French fashion house Façonnable made a beautiful film in the Villa:

New York Times article, a beautiful article discussing the history of the Villa Santo Sospir and a touching obituary to Francine Weisweiller in the UK Guardian.
See our selection of villas to rent on Saint Jean Cap Ferrat on this page.

The Villa Santo Sospir is open to public visits, upon reservation by email santosospir@aliceadsl.fr, telephone + 33 4 93 76 00 16, or visit the Official Website.

Prestigious Apartments on the French Riviera