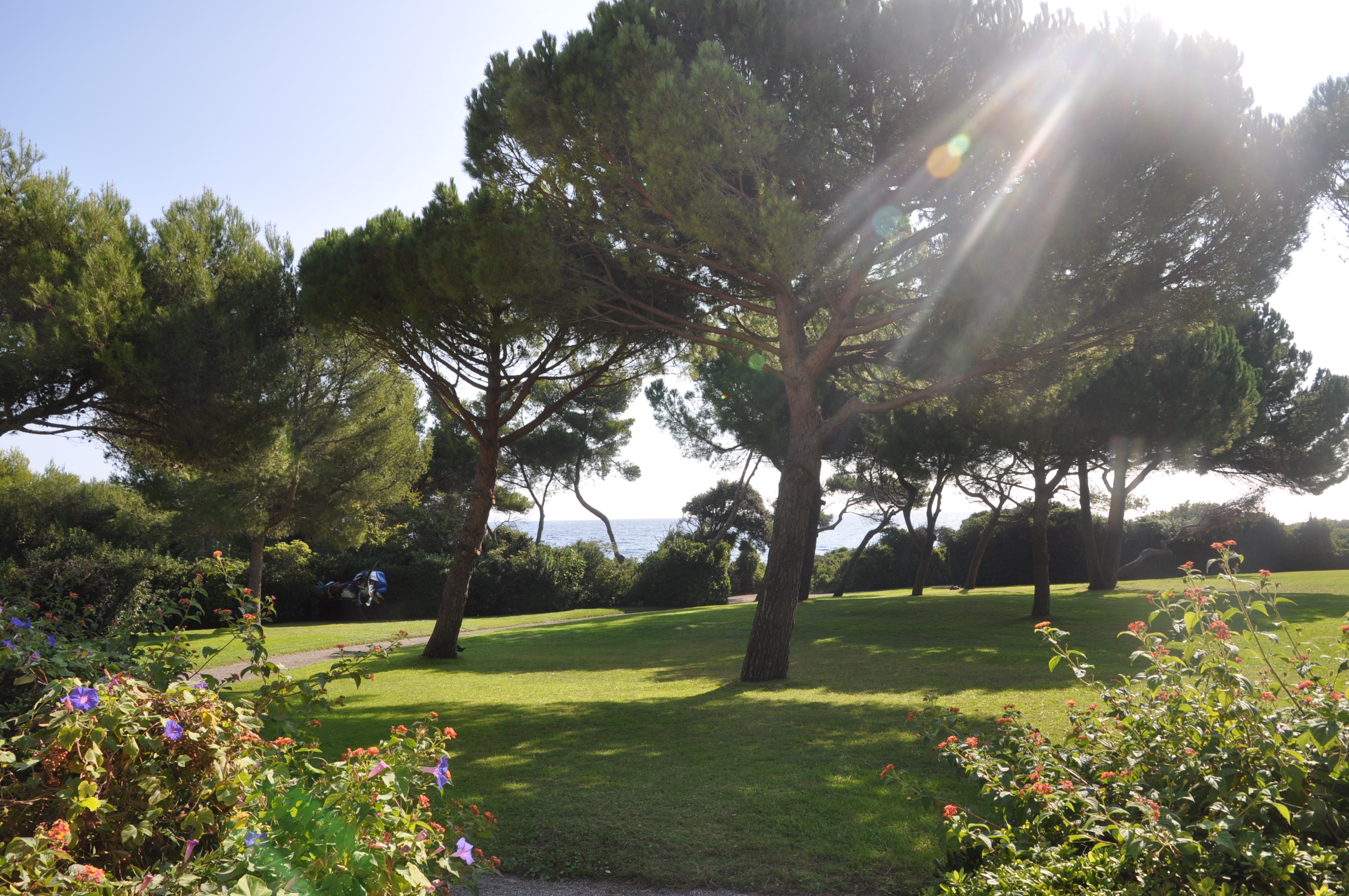 Waterfront property on the Cap d'Antibes

The property market in Antibes is not solely limited to Antibes Juan-les-Pins, it also extends to include Golfe-Juan Vallauris. Antibes is situated thirteen kilometers from Nice Cote d’Azur International Airport, and is the second most popular town in the county with 73,383 habitants. The town was built 2,400 years ago, on the site of Old Antibes, know at the time as Antipolis. Development on the cape began about one hundred and fifty years ago, continuing onto the Juan-les-Pins district around 1920. Vallauris Golfe-Juan area covers 1303 hectares and is home to 27,000 people. The area owes its fame to “celebrity” residents who include Pablo Picasso and Jean Maris.

The mild climate and quality of life have obviously contributed to its reputation. It is also seen as a beautiful spot, harboring architectural and cultural riches. The old town, Chateau Grimaldi and the Picasso museum, the city walls, remains of Vaubans fortifications, the Castion Saint-André, the Phare de la Garoupe (lighthouse) and the profile of the cape are particularly attractive. The economic factor also weighs heavily in the equation. There is no question of neglecting tourism and the ensuring secondary residence market, or the five marinas, including Port Vauban which is Europe’s biggest in tonnage. Sophia Antipolis, to the north east of the town, cannot be ignored either; Antibes is home to some of its working population.

The most prestigious district is still undoubtedly Cap d’Antibes. Juan-les-Pins and Vallauris Golfe-Juan also deserve a special mention. When it comes to analyzing the key-town, a very clear cut breakdown is required. Antibes centre takes pole position. On the one hand, the old town is very popular with relatively young foreigners while also accommodation international sailing professionals working on the Port Vauban. One the other hand, property in the Albert 1er district, which could be described as the heart of the town, is in good condition and features more modern appointments. The French favor the boulevard and do not seem to be overly disturbed by the noise; foreigners opt for the seafront L’illette area to purchase their second home. Then comes the east of Antibes. La Fontonne. The intense development here over the last thirty years can be accounted for by its proximity to Sophia Antipolis. In the Bréguières district, fields once devoted to horticulture have gradually given way to apartments complexes with pools. Another district is Jules Grec where the small road to Biot has become a major highway to Sophia. Buyers in search of villas like La Constance, a parcel of Jules Grec. Finally, property on offer in West Antibes is more varied in Saint-Jean, main assets include the south aspect, lovely developments with grounds and pool, abundant vegetation and dominating position. Chemin de Saint Claude and the Grasse road then form the boundaries of a second area particularly popular with working locals. Some noisy pollution explains why prices there are slightly lower then the aforementioned districts. Lastly, the thirty-year-old district of Les Semboules is very affordable and offers several open spaces, shops and generally functional site. The area mainly accommodates first-time buyers and little or no foreign inhabitants.

The market consists of main and secondary residences, apartments and village, semi-detached and detached houses. Cap d’Antibes has some very select developments in the Juan area, some slightly more mediocre ones around Salice, and the off few in the heart of the peninsula. Prices vary between 5,500€ and 7,500€ per square meter depending on the condition, location and the View. Port Galice, le Chateau de la Pinese, Aurélia Roc and Port Aubernon complexes are all worthy of a mention. Property in the town centre is varied but supply is short. Expect to pay from 3,500€ to 5,500€ per square metre. Shortage is also a problem in the old town where prices stand at 4,500€ for an upper floor and 5,500€ for a roof top terrace. The district of of La Badine is sometimes considered to be part of Juan-les-Pins, or is classed in the western upper parts of Antibes. The high prices, from 4,500€ to 5,500€ a square meter, are due to the dominating position and view over the Med. Special favorites there include Le parc de la Badine, and Les résidences du Montjoyeux. To the east, Les Bréguières features small two story apartment buildings, costing between 4000€ and 4,500 euros per square metre. A kilometre and a half from the centre, Peyregoue, Le Roi Soleil and Fontmerle greatly appeal to the locals. Between Fontmerle and the no nuisance) motorway, Rabiac Estagnol fetches between 3,300€ and 4,400€. Residence Flaubert and the Soleil d’Or, both with grounds, tennis court, pool and sea view, albeit remote, have a sound reputation. Buildings in the Combes district are only some fifteen years old and although it is further removed from the centre, roads are in immaculate condition.

The property market in Antibes

Prices range from 3,500€ to 4,000€ a square metre. La Croix Rouge is less residential, noisier and constantly under construction; a square metre fetches between 3,000€ and 3,500€. On the whole, prices have risen by 50% since the year 2000 and half of that increase has been brought about by foreign buyers, namely Northern Europeans and Italians. If fairly valued, an apartment will sell within two or three months.
If we exclude the extraordinary Cap area meaning all villas to rent in Cap d’Antibes, Antibes has a few up-market districts renowned for their villas. They include Ponteil, l’Ilette, the edge of the Cap d’Antibes and la Constance. Generally speaking, a 120m² house will cost 800 000€ but prices can reach 2 000 000€ (and more) depending on the actual location, size and appointments etc. In the Domaine de Pimeau, a villa with a sea view will sell more than 2 000 000€ says one agent in the area. If there is one avenue that truly represents the top end of the Antibes property market, the Avenue des Chênes would be it. It is lined with properties and apartment blocks that sell within three months of going on the market. This is well explained by the fact that Le Porteil is central, near the beach and the town centre, with everything within walking distance. Furthermore, parking is never a problem – the car park is free outside of school holidays. The only down side is that quality comes at a price and you can expect to pay up to 23% more in the local shops than you would in a supermarket. In the upper parts of Antibes (La Constance and Les Autrichiens districts), sales tend to be a little longer and prices hover around the 1,000,000€ mark for a quality property with a sea view. Buyers here are locals or retired French people. Foreign clients want to be near the sea, or otherwise prefer the village atmosphere of Mougins, Boit or Valbonne. Le Ponteil and the edge of the Cap d’Antibes is equally split between the French and European owners (Italians, Anglo Saxons, Swedes and Dutch etc). French buyers often opt for a second home that will later become their main residence. On the whole, in our area, and elsewhere for that matter, if estate agents valued properties correctly and not just to win contracts the market would be healthier, one agent comments.

Lets take a closer look at three other specific and unrivaled areas, Cap d’Antibes, Juan-les-Pins and Golfe-Juan. Cap d’Antibes consists almost entirely of houses (90%) and anything around 1,000,000€ sells very quickly. Here the elegant markets starts at 1,500,000€ a price that will buy you 150 m² and 1500m² of land. A good example is “Les Hauts de la Garoupe”, one of the latest developments with plots of 1500m², three or four bedroom houses, a pool and a garage. As a result of its regulation, Cap d’Antibes must now comply with the drastic rules stipulated by the Bâtiment de France which is keen to protect the site as much as possible. This has put an end to excessive parceling out of properties into handkerchief-size plots. It has also stopped the Pharaonic works undertaken by certain owners unafraid of disfiguring hitherto respectable buildings. Cap d’Antibes is now even more highly priced and both sellers and buyers are the first to feel the effects. It is not surprising then to find houses worth 2,000,000€ in luxury estates such as Chateau de l’Algave, Parc Saramartel and the Tamisier district alongside exceptional properties that fetch up to 23,000,000€.

Apartments are few and far between and generally in buildings constructed forty or more years ago. Although it now glows with a luxury, t=legendary image, a hundred and fifty years ago Cap d’Antibes was nothing but a headland of countryside and fields. In this area the market is cyclic, says one agent. Something happens every fifteen years and wealthy clients from different countries suddenly spring up. In the 80’s, the Middle East was highly represented. The Northern Europeans from Denmark, Sweden and Holland invaded our beaches. They were followed by the Russians, great lovers of luxury properties. However, initially, the English where behind the escalation of the Cote d’Azur, quickly followed by large American families who spent lengthy holidays in the cap. In the 21st century, famous figures like Michele Morgan, Jean Michel Jarre or Alain Delon and Jean Paul Belmondo (who shot a film there last year) can be spotted during the summer months along with the politicians keen to remain anonymous and who the estate agents will not betray.