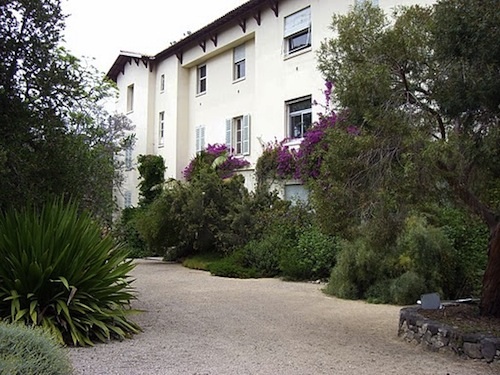 Gustave Thuret was attracted by the wilderness that had Cap d’Antibes in the mid-nineteenth century. Desiring to create a botanical garden, in 1857 he bought a large lot that was called Empel. Here he built that people from Antibes will call soon Villa Thuret Cap d’Antibes. Through an extensive network of correspondents that had met with his fame, he could receive Plant the world he tried to acclimatize to its new garden. It was quickly renamed and drew everything Côte d’Azur were the rich, often English, from seek advice for their own gardens.

Thus Thuret that participated in the realization of many gardens wealthy owners, is creating a network relational enabling it to multiply seeds and seedlings he received around the world. Most botanists Eminent visited him. It also housed many celebrities. George Sand speaks in his letters a traveler (1868) “the most beautiful garden she saw in his life”.
On the death of Thuret, his friend and collaborator, Edward Bornet, continued his work until Madame Henri Thuret born Louise Fould, step-sister and daughter of Gustave Thuret Louis banker Fould donate the villa and its garden State in 1877. Charles Naudin, a member of the institute was then appointed director, succeeded him in 1899, George Poirault (1858 – 1936) who cares passionately until his death, assuming at the same time president of the municipal committee responsible manage the city after the resignation of Gustave Chancel.

In 1927, the garden came under the authority of “The Institute of Agricultural Research ‘which became in 1946, INRA, National Institute of Agronomic Research. Later, a research center will be located near the Villa Thuret. The center will be transferred to the Sophia Antipolis in January 2004. Remains the beautiful garden which always the delight of visitors and is still administered by INRA.